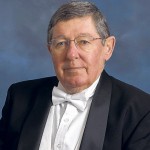 Emeritus Director of Bands, James Copenhaver assumed the position of director of bands at the University of South Carolina in 1976 and was a Professor of Music on the USC School of Music faculty. Mr Copenhaver earned BA and MMEd degrees at Morehead State University and completed two additional years of graduate study

Under Mr. Copenhaver’s leadership the USC Marching Band known simply as the Carolina Band, continued to grow and develop into one of the premier college marching bands in the country. Ex- celling not only in marching, but in musical performances as well, the band became associated with its signature introduction, “Now we present the Musical Magic of the Carolina Band.” When the university joined the Southeastern Conference, the Carolina Band became known as the “Mighty Sound of the Southeast”, continuing to entertain crowds at halftime and support Gamecock Football at home and away. The Carolina Band is also a training ground for future music educators. Scores of young musicians and educators have benefited from the experience and training provided under Mr. Copenhaver’s tutelage; and so through them his legacy has passed down to many young students in high schools and colleges across the country.
Mr. Copenhaver was highly active as a band clinician having served as a guest conductor, lecturer, and adjudicator throughout the Unit- ed States. Leading educational institutions have recognized him
for his accomplishments in the areas of instrumental performance and music education. In recognition for his talents and service, he received the Citation of Excellence from the National Band Asso- ciation, the Distinguished Service to Music Medal for Instrumen- tal Music Education from Kappa Kappa Psi National Honorary Band Fraternity, and both the Outstanding Bandmaster Award

and Outstanding Contributor to Bands Award from the South Carolina Chapter of Phi Beta Mu National Bandmaster Fraternity. In 2003, Mr. Copenhaver was inducted into the South Carolina Band Director’s “Hall of Fame” and in March 2008 into the Theta Chapter Hall of Fame of Phi Meta Mu. Mr. Copenhaver was an active member in several professional organizations within the band field, including the prestigious American Bandmasters Association. He was a Past-President of both the National Band Association
and the Southern Division of the College Band Director National Association. Mr. Copenhaver was the founder and co-conductor of the Palmetto Concert Band, an adult semiprofessional concert band that presented the Grand Finale Concert at the 1999 Midwest Inter- national Band and Orchestra Clinic.

Mr. Copenhaver retired in the summer of 2010 and continued to be a presence at the university until his passing, where he had an office in the new “Copenhaver Band Hall.

He was band director from 1951-1962 at Brookland Cayce High School in Lexington County School District Two.  He was also Director of Bands at the Gilbert Schools in Lexington County School District One from 1962 – 1970.  Tom was named Director of Bands at Campbell University from 1970-1972.   Dr. Thornley also was an instructor at South Carolina State University.
Dr. Thornley was also the Band Director and Music Department Chair at Bridgewater College until his retirement in 1997.

The SCBDA spotlights two of our members, Katie Waters and Courtney Wyatt. Congratulations to these outstanding directors!www.bandlink.org/director-spotlights-november-2022/ ... See MoreSee Less